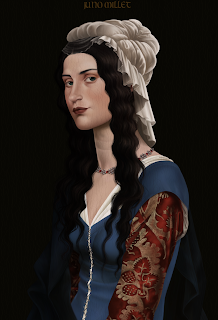 Number 1 of a series of "Human" portraits. I'll try to portray my characters before they became immortal; in that sense, I'll try to emulate the art of the period.

In this case, it's Juno Millet, circa 1420 (middle ages). This was a hard one because I didn't want to distort her features so much to make her look like those... You know, plastic-out-of-proportion middle ages portraits. So I kind of did my own version, but I'll try to avoid that in the next ones X__X It's gonna be sooooo hard with Paul, I know.

There's still six remaining, from Hellenistic Greece to nowadays. Who's gonna be next? I have no clue...
Publicado por MayYeo en 1:02 a. m. 5 comentarios: